Kandy is a beautiful city in the Sri Lankan midlands steeped in history. It’s the second largest city in Sri Lanka and was the last capital of the country’s ancient kings’ era. Bet you didn’t expect a brief history lesson on here, did you?

After a truly stunning train ride from Colombo taking approximately four hours or so – give or take another hour after a rather confusing stop in neighbouring Peradeniya – we arrived at Kandy railway station and were greeted from all directions by that ever familiar phrase:

Stubbornness got the better of us and after picking out the hotel we fancied on the map, we decided that 1.8 kilometres really wasn’t that long a walk. Of course, we didn’t account for the 60 litre backpacks we were both carrying and the map deemed it unnecessary to show that the hotel was actually up a bloody massive hill overlooking the city. Hindsight truly is a wonderful thing, and the stunning view of Kandy really was worth the walk. 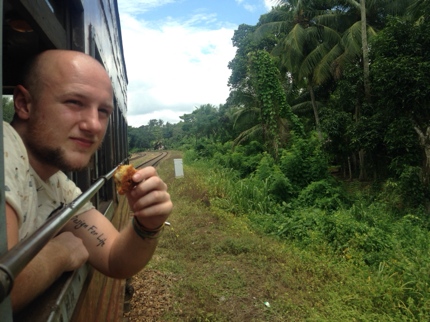 As was the case in Colombo, the locals were by and large extremely friendly and very keen to get to know you and – upon discovering that Kat and I were Australian and English respectively – talk about cricket.

I make absolutely no effort to hide the fact that I cannot stand cricket – I would rather watch paint dry. I honestly cannot think of a more boring sport, which I imagine sounds fairly rich coming from a huge Formula One fan. However, whilst in Kandy I actually tried to engage in some cricket conversation with the locals and – to my surprise – I actually think I did ok.

Regular mentions of Kevin Pietersen being dropped from the team and Cook “not having a clue” seem to have got me through so far (I knew following Piers Morgan on Twitter would come in handy some day…). Throwing in the odd cliche such as “You never know which England is going to turn up” hasn’t harmed my cause either so far. I’d give myself a B+ so far with an A for effort.

Before coming to Sri Lanka, I’d read online that – despite being a cheap country – you can really get stung when it comes to tourist attractions. As a result, I thought I knew what to expect when visiting places of interest.

First up were the botanical gardens. We’d heard that these were apparently stunning and, therefore, a must-see when visiting Kandy. I can wholeheartedly agree with that sentiment, and would recommend the gardens to anyone who appreciates a bit of serenity. We arrived early to avoid the midday heat and quickly joined the ‘foreigner queue’ (a standard thing at tourist attractions). We parted with 1100 rupees each, which is just over a fiver. Not bad eh?

That’s what we thought… 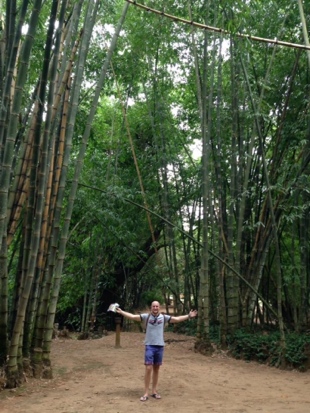 The Botanical Gardens. Good, but not THAT good.

Imagine our shock when Kat saw a local hand over 50 rupees for the exact same ticket! That’s about 25p! Now, after six months in Asia I’ve grown accustomed to paying ‘foreigner tax’ in a lot of places, but this is flat out exploitation. I’m going to do something I’ve not done for a while here: maths.

Yep, we paid TWENTY TWO times the price that a local person did to see the exact same botanical gardens. I’m all for sharing the wealth, but when does it stop being a case of ‘sharing the wealth’ and more one of ‘taking the piss’? Can you honestly imagine this happening in England? All English people get to ride on the London Eye for 50p, but foreigners pay a tenner? Didn’t think so.

Even worse was the Temple of the Tooth – a place of religious worship which apparently houses one of Buddha’s teeth.

Now, I completely understand that this is a very sacred place of worship for many people, and the building itself is really nice to look at. I’m not disputing that. As an aside, it also has free WiFi, which is pretty impressive if not a little unnecessary in a temple which has numerous signs asking for phones to be switched off.

We bought our tickets at 1000 rupees each, added to the 400 rupees I splashed out on a rather fetching sarong as I forgot to wear trousers, left our shoes behind the counter and headed in to the temple. 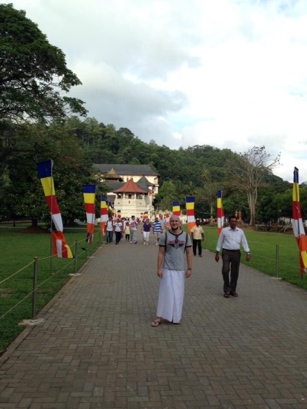 Just me in a sarong. Nothing to see here…

The temple itself can be seen in 10 minutes or so, but we strung it out a little longer. The fact you can’t actually see the tooth at any time is a little bizarre. Essentially, you’re paying 1000 rupees to wander around assuming Buddha’s tooth is knocking about somewhere inside on someone’s say-so.

We retrieved our footwear and were about the head off when the shoe guard asked for a donation. A bloody donation! As if we hadn’t already been exploited enough! Needless to say we politely declined. On the way out, I couldn’t resist the temptation to enquire at the locals counter how much their entry is…

I expected it to be subsidised, but free? Come on now! I could understand if people of a particular religion got in for free, but just any national? What about foreign Buddhists?

It seems such a shame that a country with a growing tourism market is exploiting it to such an extent. I know they’re capitalising on it for a quick quid, but what sort of effect will this have in the long term? I’d be willing to bet that quite a few tourists wouldn’t return after realising this first time round.

I really don’t mind paying those prices to see tourist attractions like these, as they are really impressive. It would just be nice to see a bit of consistency across the board. I have to say though that this is my only real criticism of what has been an amazing country to visit so far.

I’ve had this song in my head since arriving in Kandy. I really like the song, but it’s getting a bit out of hand now so I thought I’d try and pass it on to you guys. You’re welcome.

3 responses to “Kandy: Home To Tourist Traps and Having Paolo Nutini In Your Head 24/7”